IN 90 SECONDS I WILL PERSUADE YOU OF THE FOLLOWING:

EarthBound is a postmodern videogame, and it is good. 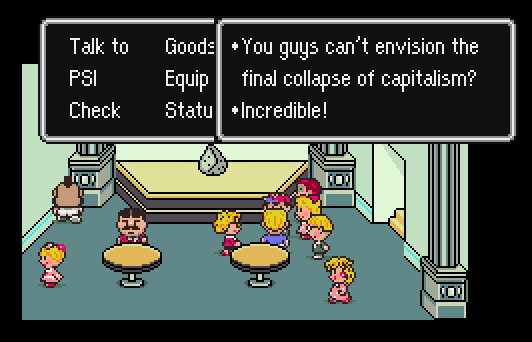 EarthBound is a Japanese RPG that is set in Eagleland (Definitely Not America), starring a bunch of kids who become Unlikely Heroes to take on the threat of an Evil Alien Invasion.

It’s weird and goofy and full of wonderful imaginative setpieces, like:

This uniquely bizarre take on the daydream of American suburbia— and the daydreams of various other cultures that you encounter along the way— is immersive, innovative, hilarious, and surprisingly emotional. It blends mundane real-world mechanics and videogame logic in a delightful way. Call your dad from a pay phone to save your progress. Order pizza delivery to restore HP. Talk to some incredibly unhelpful NPCs.

EarthBound's cleverness isn't limited to the writing, either: the gameplay itself is wonderful. The combat is challenging and intense without being arcade-hard. The level designs are thoughtful, diverse, and reward exploration. And the soundtrack is a jam.

All of which is to say, EarthBound nudges pretty hard at the fourth wall— when it’s not smashing straight through it.

This isn't the kind of postmodern metafiction that exists soley to get up its own ass about how clever and funny it is, either (although it is very clever and funny). EarthBound nudges you in the side with a wink and a smile to ask more important questions.

EarthBound came out in 1994, revolutionized the genre, directly inspired Undertale and a bunch of other terrific and boundary-pushing games, and it still holds up today.

It’s absolutely great. It's postmodernism with a full and shining heart. Play it.